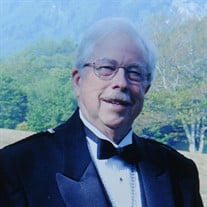 The Rev. George Wilson Gunn, Sr. (94) died at his home at Givens Highland Farms in Black Mountain, N.C., before dawn on October 5, 2020. He was born June 15, 1926, to Eliza Drayton (Woodside) Gunn and the Rev. Dr. Charles Groshon Gunn in Bluefield, West Virginia. George was married to Sara Louise (Smith) Gunn for 67 years prior to her death in 2017. They raised and are survived by their four children, all of whom live in North Carolina: Wilson (Pam); Herb (Joan Dennehy); Genie (Jude); and Knox. Known by his family as “Pop” Gunn, George is also survived by his brother-in-law James Sidney Langrall, twelve nieces and nephews, six grandchildren, and three great grandchildren. He was predeceased in death by his parents, his brothers Charlie (Ginny) and Jim (Shirley), and their sister Libby Langrall. Educated through Miss Blanche’s kindergarten and the Bluefield (WV) public school followed by The McCallie School, Davidson College, and Louisville Seminary, George provided a lifetime of service in the Presbyterian Church. His passion for and career in campus ministry was fruitful at the University of Georgia, the University of Arkansas, and Lees-McRae College in Banner Elk (NC). He was a founder of the National Campus Ministry Association and led the Office of Higher Education of the Presbyterian Church, U.S.. George pastored congregations across Arkansas, Texas, and North Carolina. George was a prolific writer, poet, photographer, oil painter, numismatist, and philatelist. He will be forever remembered for his quick and relentless wit, a lively intellect, passion for social justice and racial reconciliation, and his loving engagement without caution or condition with family, friends, and newcomers. In lieu of flowers, consider a gift in George and Sally’s name to the rural community of Nkhoma, Malawi, in support of health, education, and safe drinking water in southeastern Africa. Send through “Fletcher Presbyterian Church” – memo “Malawi Mission” – at Fletcher Presbyterian Church, P.O. Box 493, Newland, NC 28657. An online Memorial Service will be held Sunday, November 1, 2020, at 2 p.m.. The service planned by family will be on Zoom. To participate, please email herbgunn @ gmail.com and inquire. Condolences may be sent to the family through our website at www.highlandscare.com.

The family of The Rev. George Wilson Gunn, Sr. created this Life Tributes page to make it easy to share your memories.