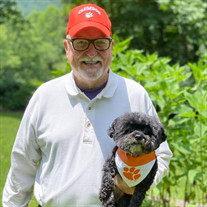 Guy B. Leary III (CDR, USN, Ret), age 73, of Hendersonville, NC, died at Elizabeth House of IPF, Pulmonary Fibrosis on Saturday, April 23. IPF did not define Guy; he was so much more. Guy grew up in North Augusta, SC. He was the late-life son of Guy B. Leary, Jr. and Hazel King Leary. He was an unexpected joy and surprise to his parents and 14-year-old sister, Carolyn. Guy was a life-long Methodist. He was a member of Grace Methodist in North Augusta, Ortega United Methodist in Jacksonville, FL, and First United Methodist in Hendersonville, NC. During the last 20 years, he became more involved in the church, serving on the Board of Trustees in both Jacksonville and Hendersonville. He was involved and loved the men in his Emmaus group and participated in their bi-weekly Bible Study. Guy proudly served for 24 years as a Naval Flight Officer (NFO) in the U.S. Navy. The majority of his career was spent in the P-3 aviation community specializing in anti-submarine warfare. He began his career in Pensacola, FL, served in numerous locations and retired as a Commander in Jacksonville, FL. He received a Master’s Degree from the Naval Post Graduate School in Monterey, CA in 1986. Following high school graduation, Guy attended Clemson University, graduating in 1970 with a B.S. Degree. Guy was a loyal and avid Clemson supporter throughout his life. He attended as many Clemson football games as possible both at Clemson and away games. Guy was a strong Christian who found peace and joy in serving his Lord Jesus Christ. He treasured the good friends in his life, many going back to his Clemson days. He had an abundance of curiosity and enthusiasm for researching; Google was his friend. Guy was an adventurous, creative cook, who quickly mastered the Instant Pot. He enjoyed serving many successful, delicious meals to family and friends, with seldom a flop. Guy greeted each day with a smile and was quick to laugh. He was a kind and caring man; honest and ethical in all his endeavors. His passions included, in addition to serving Jesus, his love for Vicki, his Clemson Tigers, golf, and spending time with family and friends. There was always a dog or two in the Leary home. The one who completely stole Guy’s heart and always loved Guy best is their current dog, LoLa. Guy was predeceased by his parents, sister, Carolyn Williams, and his brother-in-law, Chuck Dowdy. He is survived by his wife of 40 years, Vicki D. Leary, his brother-in-law, Jim Williams of Acworth, GA, his sister-in-law, Jane Pressley, and her husband, Robert, of Charlotte and Hendersonville, 18 nieces, nephews, great-nieces and nephews, and 2 great, great-nieces. Guy loved the special relationship with his West Coast Williams family – nephew and niece, Mike and Pam, and their twin girls, Bella and Rees, of Seattle, WA. Guy was grateful for and loved the many wonderful friends and family in his life, especially during his final, valiant battle with IPF. He will be greatly missed by all who loved him. His Memorial service celebrating Guy’s life will be held in the Sanctuary at First United Methodist Church, 204 Sixth Avenue, West, Hendersonville, NC on Thursday, April 28 at 1 PM. A reception will follow at Hendersonville Country Club. Donations in Guy’s memory may be made to Four Seasons Foundation for Elizabeth House, 211 N. Main Street, Hendersonville, NC, or to Cards for Hendersonville Causes, 69 Old Pasture Way, Hendersonville, NC 28739. Their website is www.cardsforacauseNC.com, or to a charity of your choice.

Guy B. Leary III (CDR, USN, Ret), age 73, of Hendersonville, NC, died at Elizabeth House of IPF, Pulmonary Fibrosis on Saturday, April 23. IPF did not define Guy; he was so much more. Guy grew up in North Augusta, SC. He was the late-life son... View Obituary & Service Information

The family of Guy B. Leary III (CDR, USN, Ret.) created this Life Tributes page to make it easy to share your memories.

Send flowers to the Leary family.