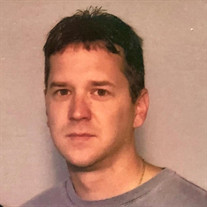 Jason Peter Durall of Mills River North Carolina passed away at his home on Tuesday morning, May 15, 2018. Jason was born February 27, 1971 in Emporia, Kansas and was 47. He is the son of Mary Ann Petro Durall and the late Keith Leighton Durall. He was married to his beloved wife, Angelina Marie Ables-Durall on November 6, 1992 in Emporia, Kansas. Jason and family established residence in Mills River in 1994. In addition to his wife and mother, Jason is survived by his two children, his daughter, Cortney Breanne Durall and son, Gage Leighton Durall, both of Mills River, NC; his brothers, Chris (Christy) Durall of Sudbury, Massachusetts and Tony (Heather) Durall of Hendersonville, NC; nieces and nephews, Ashley, Cole, Sebastian and Zoe also, four half siblings Jed, Rob, Dan and Amiee all of Kansas. Jason is also survived by his sister and brother-in-law, Christina Van Arsdale-Tyson (Dennis) of Waverly Kansas and Robert Ables of Mills River NC. Nieces, nephews and great-nieces, Isaac (Lauren), Sydney, Taylor, Rocket, Rayne, Mia & Julia; father-in-law Jack (Kathy) Ables of Lebo, Kansas and sisters-in-laws, Ivy and Abby. Jason was proceeded in death by his mother-in-law, Carolyn Massingill-Ables of Burlington Kansas. Jason graduated from Emporia High school and continued his education at Emporia State University before transferring to UNCA where he received his BA in accounting. He was a former manager, financial planner & analyst at Arvato Digital Services/Sono Press USA. He currently held the position of accounting supervisor at Linamar in Arden. Jason’s biggest love was his wife, children and family. He enjoyed outdoor activities, grilling, camping, boating, skiing, target shooting and hunting. Jason was a great craftsman who enjoyed woodworking. He was also very passionate about his career and coworkers, whom he considered family. Jason was a most loyal and loving friend to all. In lieu of flowers, donations may be made to the Henderson County Emergency Services in C/O Highlands Cremation & Funeral Care at 2393 Hendersonville Rd, Arden NC, 28704. A service in celebration of Jason’s life will be held at 2:00PM on Monday, May 21, 2018 in the Chapel of Highlands Cremation & Funeral Care, 2393 Hendersonville Road. The family will receive friends beginning at 1:00PM.

Jason Peter Durall of Mills River North Carolina passed away at his home on Tuesday morning, May 15, 2018. Jason was born February 27, 1971 in Emporia, Kansas and was 47. He is the son of Mary Ann Petro Durall and the late Keith Leighton Durall.... View Obituary & Service Information

The family of Mr. Jason Peter Durall created this Life Tributes page to make it easy to share your memories.

Send flowers to the Durall family.