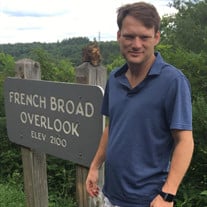 Jason Alan McCain of Vicksburg, MS, Houma, LA, and Asheville, NC passed away unexpectedly on September 9, 2020 at the age of 41. Jason was an amazing and loving husband, father, son, and brother, a hardworking and brilliant financial analyst, a talented and fun-loving musician, and an irreplaceable, kind, and loyal friend to so many people. As his death was sudden and he was young, he lived his life very fully up until the end. He loved and was loved deeply. He will be so missed. Jason was born on May 7, 1979 in Memphis, TN and was raised in Vicksburg, MS. He was the youngest of four children, earning him the nickname “Baby.” The name stuck for so long that he eventually became “Uncle Baby” too. Jason attended Warren Central High School. In recent years, Jason and Christina visited the high school to attend a few football games. Jason had even managed to find a way to watch the livestreamed games remotely on TV. Jason went on to graduate college from Mississippi State University in Starkville, MS. He began his career in Houma, LA at Charles Theriot, CPA where he worked for eight years. He and his family moved to Asheville in August 2019 where he continued his career at Johnson, Price, & Sprinkle. Jason and Christina worked hard to make this move and very literally “had it all” in their new town. Jason was an explorer, having lived in a multitude of places during his life. A few of these included Starkville, MS, Jacksonville, FL, Salt Lake City, UT, New Orleans and Houma, LA. He had a set of stories, people, and experiences from each place that he held dearly. He and his wife Christina Vedros McCain (Bena) moved to Asheville together with their three children because of a longing to spend more time in the outdoors exploring, hiking, and camping. Jason wanted to spend time fishing in the rivers and streams in the area. He liked playing basketball and baseball. He was great at both and loved playing “pick up” games wherever he could find them. Jason was a great dad. He talked with Lola, Ruby, and Julien. He held them. He wanted to give them everything they could possibly want in the world. He wanted them to be themselves and was great at connecting with them individually to be the dad that each child needed. He was present and sweet and involved. He loved to take his children on (as his daughter Ruby will tell you) “Adventures.” Jason was a great husband. He loved Bena and made sure she knew it. He was lovely to go out on the town with. He was lovely to stay home with. The two loved to play ping-pong and darts together. He was caring, supportive, understanding, and respectful. To most that met them, their relationship was as star-crossed and enviable as any had seen. They quite frankly completed each other in a way that was perfect and beautiful. Jason’s passion and work ethic extended to everything he did. A beautiful musician, he had enjoyed writing and playing music with his bands, friends, and family. Years ago, he played shows at local restaurants and bars. While he was naturally introverted, he still managed to entertain crowds while keeping his eyes closed the entire time. He had started to work on an album just a few weeks ago with a close friend. His family has fond memories of him playing his guitar and singing with the kids while they danced and strummed along. He had planned on guiding the kids’ musical ambitions. Jason is survived by his wife Christina Vedros McCain, his children, Lola Jean, Ruby Lee, and Julien Ellis McCain. He is also survived by his parents Rebecca and Heber McCain, his brothers Will and Michael, his sister Kimberly McCain McDaniel, along with nieces and nephews Micah and Kira McCain (father Will), Tyler McCain (father Michael), Shelby and Patrick McDaniel (mother Kimberly). A memorial will be held to celebrate Jason’s life at 17 Madelyn Lane, Fairview, NC on Saturday, September 19, 2020 beginning at 3:00 PM. Family members and friends will be invited to gather and speak in remembrance of Jason at 4:00 PM. Food and drinks will be available. A memorial will also be held in in his hometown of Vicksburg, MS 2:00 PM, Saturday, October 10, 2020 at Vicksburg City Auditorium, 901 Monroe Street, Vicksburg, MS. Subsequent memorials may be held to celebrate Jason’s life with his many communities in Mississippi and Louisiana. In lieu of flowers, please consider donating to a college fund for Jason’s three children. Donations may be made to Christina through her Venmo account or by mailing a check to the family home; 17 Madelyn Lane, Fairview, NC 28730.

Jason Alan McCain of Vicksburg, MS, Houma, LA, and Asheville, NC passed away unexpectedly on September 9, 2020 at the age of 41. Jason was an amazing and loving husband, father, son, and brother, a hardworking and brilliant financial analyst,... View Obituary & Service Information

The family of Jason Alan McCain created this Life Tributes page to make it easy to share your memories.

Send flowers to the McCain family.