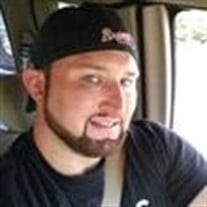 Jeremy Joseph Livingstone, of Arden, NC, died unexpectedly on July 1, 2017, at the age of 35. Jeremy leaves behind his parents, Joe and Tobey Livingstone of Arden; his sister, Jennifer Livingstone, of Greenville SC; and his wonderful uncle Jerry Livingstone, of Arden, with whom he had an especially loving and close relationship. Jeremy is also survived by his aunt, Anne Hunt (Peter) of Hickory, NC; his uncle, Tim Reid (Barbara) of Leicester, NC; his uncle, Jim Searcy, of Arden; his cousin, David Barnwell (Laurie) of Indiana; his cousin, Melanie Snelson (Brad), of Leicester, NC; his cousin, Stacey Gerhardt (Chris), of Florida; and his cousin, Philip Hunt (Karen) of Hickory, NC. Jeremy leaves behind many other extended family members, as well as many caring and loving friends. Jeremy graduated in 2000 from TC Roberson High School, where he excelled academically and athletically, and was a member of The National Honor Society, and football and wrestling teams. He attended Western Carolina University, and was a member of the KA Fraternity, before joining his family's business, Livingstone Plumbing of Arden. Jeremy's brilliant mind approached a problem to be solved with reason, passion, and determination. He loved a challenge, and was happiest when solving a problem for a family member, friend, or customer. He was compassionate and nurturing, caring for his mother, father, and sister during times of illness. Jeremy was creative, loyal, thoughtful, kind, and funny. He was generous with his time and resources, and he loved to laugh. He was often described as "easy to be around". He once rescued his sister from a snowstorm so the family could have Christmas together, and created and rapped a song of thanks to a family member for being given a pair of pants that he loved. Friends agreed that he loved nothing better than knowing he had made a difference in someone else's life. While Jeremy had a brilliant mind and accomplished skill set, his greatest attribute was his passion for life, his huge loving heart, and his love for his family and friends. Jeremy was active in youth baseball, performed magic shows, and followed his dad, Joe, around to help him with various projects. He had an especially close relationship with Joe. As Jeremy was just learning to talk, when asked what his name was, he would reply "My name Joe". That says it all regarding his love and admiration for his father. Like his father, Jeremy was an avid Atlanta Braves fan. He was a member of a Braves Twitter fan club where he regularly communicated with fellow Braves fans; his Twitter bio referred to Braves baseball as his "happy place". When news of Jeremy's passing spread among the Braves fans, they started a GoFundMe account in his name. The Atlanta Braves organization will donate a legacy brick in Jeremy's memory at Sun Trust Park. A memorial service to celebrate Jeremy Livingstone's life will be held on July 16, 2017 at 11 AM at the Arden Seventh-Day Adventist Church at 35 Airport Road, Arden, NC 28704. The family will greet friends in the fellowship hall at the church after the service. Any and all who knew Jeremy are welcome to come and remember him with us. Those who wish may send flowers to the church or make a donation in Jeremy's name to the National Alliance on Mental Illness (NAMI). Jeremy's family is resting in faith and standing on God's promise of a reunion in Paradise. Jeremy - we loved you then, we love you now, we love you forever.

Jeremy Joseph Livingstone, of Arden, NC, died unexpectedly on July 1, 2017, at the age of 35. Jeremy leaves behind his parents, Joe and Tobey Livingstone of Arden; his sister, Jennifer Livingstone, of Greenville SC; and his wonderful uncle Jerry... View Obituary & Service Information

The family of Jeremy Joseph Livingstone created this Life Tributes page to make it easy to share your memories.

Send flowers to the Livingstone family.