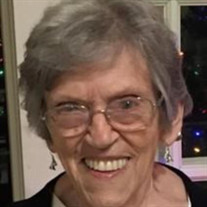 Joan Elizabeth Mathewson, 94, passed away peacefully on September 24, 2021 at Heather Glen at Ardenwoods, a wonderful assisted-living home in Arden, NC, surrounded by her loving daughters. Joan was a caring daughter, sister, wife, mother, grandmother, great-grandmother, aunt, and friend. She was born in Milwaukee, WI, the second of four children. In 1950 she married Kenneth Armon Mathewson and together they had four daughters. She loved living in Wisconsin, but in 1972 Ken’s job transferred the family to Santa Barbara, CA and that became home for nearly four decades. After 48 years of marriage she became a widow, and in her later years she moved with one of her daughters to Tyler, TX, and then to Brevard, NC. Joan was very artistic and created many beautiful watercolor paintings, stitchery, and jewelry designs. She could sew and mend anything. She enjoyed collecting antiques, angels, and loved all sorts of pretty things. Her Catholic faith was a foundation of her life, and she especially enjoyed volunteering as a Eucharistic Minister, both at Mass and to patients at the local Rehabilitation Hospital. Over the years she also volunteered as a Girl Scout leader, a hospital “pink lady”, and in the religious education office at church. She had a delightfully expressive personality, and was known for her dramatic gestures, whoops, giggles, and laughter. She was the glue of the family, wrote great letters and always kept track of who was doing what. She loved coffee and chocolate and spending quality time with her family and friends. She was preceded in death by her husband Ken, as well as all her siblings and in-laws; she was the last of her generation. She is survived by her daughters, Mary (Arthur) Pollasky, Judith (Archie) Steel, Jeanne (Ron) Runolfson, and Laura (William) Kearns, 16 grandchildren, 14 great-grandchildren, and a very large extended family. Visitation will be on Thursday, September 30th from 5:00 to 7:00 pm at Moody-Connolly Funeral Home, 181 South Caldwell Street, Brevard, NC 28712, followed by Funeral Mass on Friday, October 1st at 10:00 am at Sacred Heart Catholic Church, 150 Brian Berg Lane, Brevard, NC, 28712. There will be a Memorial later this year in Santa Barbara, CA, where her ashes will be interred at Calvary Cemetery. Those wishing to donate in her honor may consider a favorite charity of hers, Heifer International.

The family of Joan Elizabeth Mathewson created this Life Tributes page to make it easy to share your memories.

Send flowers to the Mathewson family.