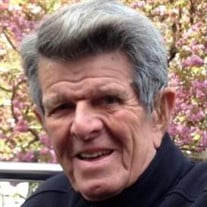 Kenneth “Ken” McManus Davis, 89, passed away on March 8, 2021, at Four Seasons Hospice, after a period of declining health. Ken was born in Greensboro and raised in Gastonia, NC, son of Zay and Mabel Davis. A graduate of Gastonia High School, Ken was the organizer of his 70th Class Reunion two years ago and enjoyed coordinating that event and re-connecting with old friends. In 1957, Ken married Ellen Faulkner, whom he met on a blind date while both were students at Brevard College. They spent their 63 years of marriage living in both Charlotte and Hendersonville. He was a devoted husband, father, grandfather, and great-grandfather. Being married to Ellen taught Ken to love dogs and they shared their home with many of them throughout their marriage. Ken is survived by his wife, Ellen; sons, Larry Davis (Karen) of Wake Forest, Tom Davis (Carol) of Hendersonville and Richard Davis of Charlotte; daughter Sally Davis of Asheville; brothers Bob Davis (Doris) of Charlotte and Max Davis of Roanoke, VA; grandchildren Emily Long of Charlotte, Betsy Jones (Byron) of Charlotte, Ben Davis of Raleigh, Matt Davis of Hendersonville, NC, Jamie Staggs (Richie) of Pittsboro and Kristyne Forbes (Christian) of Tempe, AZ; 9 great-grandchildren; and his beloved dog, Bonnie. Ken was preceded in death by his brother, Gene Davis of Gastonia. After serving in the Air Force, Ken received his Bachelor’s degree in Education from Appalachian State University. He spent his career in sales and truly never met a stranger. Whenever Ken wasn’t traveling for work or spending time with his family, you would find him on a nearby golf course. He had a real passion for the game, whether playing or watching, and was a long -time member of Etowah Valley Golf Course. Ken was a member for many years of First United Methodist Church in Hendersonville, where he was a proud participant and leader of the Roy Johnson Sunday School Class, which he often referred to as the “church pillars”. Funeral services for Ken will include Thursday, March 11th, 1pm at First United Methodist Church, Hendersonville (Social Distanced, Masks Required, Limited Capacity) and Friday, March 12th, 12 noon graveside for friends and family, at Forest Lawn West in Charlotte. Memorials may be sent to the Roy Johnson Sunday School Class c/o First United Methodist Church or the Blue Ridge Humane Society, both in Hendersonville. Highlands Cremation and Funeral Care is in charge of arrangements and condolences may be sent to the family through our website at www.highlandscare.com.

Kenneth &#8220;Ken&#8221; McManus Davis, 89, passed away on March 8, 2021, at Four Seasons Hospice, after a period of declining health. Ken was born in Greensboro and raised in Gastonia, NC, son of Zay and Mabel Davis. A graduate of Gastonia... View Obituary & Service Information

The family of Mr. Kenneth McManus Davis created this Life Tributes page to make it easy to share your memories.

Send flowers to the Davis family.