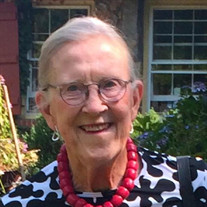 Textile artist Kerstin H. McDaniel, 84, died at her Asheville home in the company of her family on September 7, 2021 after several years of declining health that she met with characteristic courage and grace. Her life was a magical combination of art, education, service and family and her creative legacy will carry on through the multitude of works found in churches and sacred spaces across the country. An artist to the core, Kerstin was born to Ragnhild and Anders Hedin in Boras, Sweden on September 11, 1936, and grew up in a family of talented artists and craftspersons. Her talent as a textile artist emerged as a very young child and continued into adulthood. She lived her belief that if she could make something with her hands, she could always support herself, a philosophy that carried her through a long and fruitful life as an artist and designer. Kerstin’s introduction to the United States was as an exchange student with the American Field Service in North Hollywood, California in 1954. She returned to study at the Fashion Institute of Technology in New York. Earning her degree in fashion design in 1959, she was honored with the Outstanding Design Student Award upon graduation. An early career in fashion design began in Stockholm but she was soon called back to the US to serve as a designer for Hadley Cashmeres in New York, with a manufacturing facility in Weaverville. Commuting from New York to Weaverville introduced her to Asheville which became her beloved home in 1963. Kerstin met husband Holcombe McDaniel while designing costumes for Asheville Community Theatre in 1963. Together the McDaniels founded Gildafrox, a fine children’s clothing company named for their daughter, Gilda, which enjoyed a strong following nationally until Kerstin and Hol-combe chose to devote more time to family life. Following her love of art and education, Kerstin discovered the art department at UNC-Asheville in the mid-1980s and completed a Bachelor of Fine Arts Degree, graduating Magna Cum Laude with Art Department Distinction in 1989. Her study of painting and art history while at UNC-A influenced a transition in her art and led to her most rewarding and successful career path. Kerstin’s later career emerged through her involvement with The Cathedral of All Souls in Biltmore where she was a devoted and active member for over 50 years. Always creative, her roots in needlework blended with her training in painting and study of art history and Christian symbolism, and her career gradually shifted to a specialty of liturgical textiles. She developed a signature technique of “painting with fabric” that fused the disciplines of painting and needlework into a distinctive style. Over the final 30 years of her career, Kerstin was commissioned to design and create professional banners, kneelers and vestments for hundreds of churches across the US. She was particularly proud to be commissioned to create altar hangings and banners for the new chapel at Virginia Theological Seminary, designed by Robert A. M. Stern and consecrated in 2015. Her largest body of liturgical work is found at The Cathedral of All Souls in Biltmore https://www.allsoulscathedral.org/textiles and she has secular textile pieces and paintings in the collections of Mission Hospital, CarePartners and UNC-A, among many other private collections. Of all her many interests outside of her art, Kerstin’s involvement with All Souls was her passion. Widely respected for her wisdom and knowledge, she served on the vestry, chaired the Altar Guild, served on the Cathedral Arts Commission and many other special committees over the years. Kerstin was also an enthusiastic supporter of the growing arts community in Asheville. She was a founding member of the Asheville Gallery of Art, Asheville’s first cooperative gallery founded in 1988 in downtown Asheville, leading the way for many future galleries to open downtown. Kerstin also enjoyed serving as a docent at Asheville Art Museum for many years. She took great delight in watching Asheville grow from the quiet town of the 1960s to the current bustling art destination. Kerstin will be greatly missed by daughter Gilda McDaniel and partner Stephan Meyers of Pittsboro, North Carolina and sisters Annastina Sandring of Drottningholm, Sweden and Inga Hade of Boras, Sweden and their families and many dear friends. She was preceded in death by husband Holcombe McDaniel and brother Svante Hedin of Gotland, Sweden. Her humor, vitality, enthusiasm, good cheer and kind generosity will live on in our memory. Gilda wishes to thank Joyce Ad-cock and Stephan Meyers for their gentle and loving care. A memorial service will be held at 11:00am on Friday, November 19, 2021 at The Cathedral of All Souls. Memorial contributions in Kerstin’s honor can be made to The Cathedral of All Souls in Biltmore.

Textile artist Kerstin H. McDaniel, 84, died at her Asheville home in the company of her family on September 7, 2021 after several years of declining health that she met with characteristic courage and grace. Her life was a magical combination... View Obituary & Service Information

The family of Kerstin Ingrid Hedin McDaniel created this Life Tributes page to make it easy to share your memories.

Customized sympathy cards. Mailed for you.