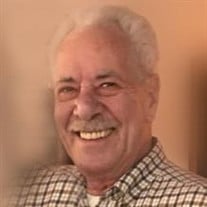 Leon was born in Hackensack, NJ May 12, 1932. He passed on April 9, 2019, just shy of his 87th birthday at the Life Care Center in Hendersonville, NC. He was predeceased by his parents Leon and Jacqueline Audino; his brothers Emanuel (Nello) and Pietro (Peter) and grandson Justin Audino. Leon attended Rutgers University and Rhode Island School of Design before entering the Army where he served in KMAG, the Korean Military Advisory Group. Upon his return he went into business with his father and brother Nello, forming Audino Cleaners and was later joined by their brother. While living in Woodcliff Lake, NJ, he was a scout leader and president of Rockland County Radio Control Flying Club as well as an athletic association coach. Leon was a voracious reader, avid fisherman, bird enthusiast and enjoyed all types of music – especially jazz. He also enjoyed building luxury homes while in NJ. There was never a home project he couldn’t accomplish himself – be it plumbing, electrical, tile, welding, painting and gardening. He was always passionate about sports cars and airplanes and was able to fulfill a lifetime goal by obtaining his private pilot’s license when he was 42 years old. Upon retiring, Leon and Kathy moved to Davie, FL. One of the things he loved was fishing from his canoe in the everglades while antagonizing the alligators, much to Kathy's chagrin. After 20 years they moved to the mountains in Hendersonville, NC to be closer to their family. Leon enjoyed being a member of the Western North Carolina Air Museum. One of his greatest accomplishments was restoring a 1948 Stinson airplane in his garage which he later flew over the Blue Ridge Mountains. He was the consummate host…with a scotch in hand, he loved to tell a good joke and no matter what genre of music was playing you could find him out on the dance floor. He'll especially be remembered for muddling outstanding Old Fashions and serving perfect Manhattans. Always with a smile on his face and a hearty contagious laugh, he will be missed by all who knew him. Leon is survived by the loves of his life – his wife and best friend of 63 years, Kathy; his daughter Dorre and husband Douglas White of Fairview, NC; Donna Audino of Fairview, NC; son David and fiancé Kelly of Bloomingville, OH; Debra Delia of Asheville, NC; granddaughters Kristin and husband David Risdahl of Knoxville, TN; Danielle and husband Travis Young of Waco, TX; Nicole and husband Butner Brimberry of Sherman Oaks, CA; and grandsons, Dylan Audino of Salem, OH and Trevor Delia of Asheville, NC; and great granddaughters Abigail and Anabelle Risdahl of Knoxville, TN. There will be a memorial service held at a later date. In lieu of flowers, the family kindly asks for donations to Four Seasons Hospice at 211 No. Main Street, Hendersonville, NC 28792.

Leon was born in Hackensack, NJ May 12, 1932. He passed on April 9, 2019, just shy of his 87th birthday at the Life Care Center in Hendersonville, NC. He was predeceased by his parents Leon and Jacqueline Audino; his brothers Emanuel (Nello)... View Obituary & Service Information

The family of Mr. Leon Armando Audino created this Life Tributes page to make it easy to share your memories.

Send flowers to the Audino family.