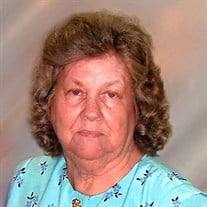 Margie Faye M. Blakeman, 81 of Fairview, entered this life on December 23, 1935 and entered eternal life on April 3, 2017. Mrs. Blakeman is now home with our Lord and Savior. She was preceded in death by her loving husband, Rev. Donald D.... View Obituary & Service Information

The family of Mrs. Margie Faye Blakeman created this Life Tributes page to make it easy to share your memories.

Margie Faye M. Blakeman, 81 of Fairview, entered this life on...

Send flowers to the Blakeman family.