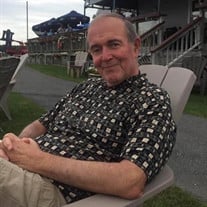 Michael D. Golding, 71, of Hendersonville, NC. Born in Lynn, MA. Graduate of Lynn Classical and Northeastern University (Criminal Justice). A kind and thoughtful man, Michael loved being with his family, engaging with everyone, making new acquaintances and helping others wherever he went. During his 20+ year law enforcement career, first in Nahant, MA as an officer and last in Durham, NH as the Captain of Police, as well as in his role as the campus security director - at McIntosh College, Great Bay Community College, and Blue Ridge Community College - all who crossed his path found a personable and loyal colleague and friend. It was especially meaningful to him when, in his capacity as a juvenile officer, those he had assisted in their youth shared how much his guidance had made a difference in their lives. Michael enjoyed his work with the New Hampshire Police Association, historical and genealogical research, taking pictures, watching Jeopardy, and quoting Mr. Rogers and The Blues Brothers. He knew all the back road shortcuts, police and fire station scanner codes (listening in when his lieutenant son had a shift at the Dover FD), and, as the former Vice President of the Seacoast NH chapter of Parrot Heads, the lyrics to every Jimmy Buffett song. He was always reading newspapers local to him and publications covering his childhood home (Nahant), where he lived most of his life (NH), and his favorite place (Key West). Michael was most content when he could just sit with the people he loved, all within his view, in the same room at the same time. His wife and children were together with him when he passed peacefully. Missing his warmth, wit, and protective presence are the love of his life, wife Carol Golding (of Hendersonville, NC), his three children, of whom he was so proud, Kimberly Golding (of Rome, Italy), David Golding (of Barrington, NH), Kurt Tomcavage (of Philadelphia, PA), his daughter-in-law Anne Golding, and three grandchildren Cole, Aidan, and Parker Golding. Hamlet, his canine sidekick, also feels the loss of his favorite walking buddy. Due to New England winter weather (a phenomena he liked following at a distance) and in respect of all current public health directives, a service will be held at a later date this summer in Nahant, MA. Michael will be buried at Greenlawn Cemetery, alongside his mother Helen Niosi (and her husband Joseph), his father David A. Golding, and his grandparents Thomas and Mary Prendiville. In lieu of flowers, Michael would appreciate support of the Nahant Historical Society: https://nahanthistory.org/

The family of Michael D. Golding created this Life Tributes page to make it easy to share your memories.

Send flowers to the Golding family.