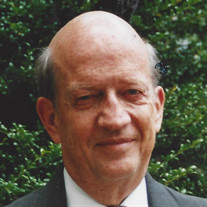 Robert Dowdle “Bob” Collier, 87 of Asheville died July 10, 2017 in Missouri City, Texas while visiting family. Born May 28, 1930 in Cedar City, Utah, he was son of the late Theodore and DeFonda Collier. He was also preceded in death by two brothers, one granddaughter and one great-granddaughter. As a youth he lived in Logan, Salt Lake City, Taylorsville and Provo, Utah. He married RaeAnn Boyer on September 8, 1955 in the Salt Lake Temple of the Church of Jesus Christ of Latter-day Saints. All of his children and their spouses were wed in an LDS Temple, this made him extremely happy. After graduation from Brigham Young University, he worked in Mechanical Engineering in Ontario, Van Nuys, and North Edwards, CA, Lindon, NJ, Schenectady, NY, Spokane, WA, DelCity, OK and Rantoul, Campaign, Moline, IL. He came to Arden, NC in 1968 to work at Taylor Instruments. He finished his career with the LDS Physical Facilities. He is survived by wife, RaeAnn Boyer; his ten children, Lynette (Bradley) Jones, Lisa (Gregory) Kellar, Eric (Cynthia) Collier, Jolene (David) DeFranco, Alan (Cara) Collier, Rachel (Joseph) Murdock, Wayne (Karen) Collier, Martha (Steve) Garvin, Marian (Tommy) Hobson and Ted (Laura) Collier. In addition, he has one sister, three brothers, 48 grandchildren and 25 great-grandchildren. Bob was a good man, he was a dedicated member of the Church of Jesus Christ of Latter-day Saints and was always willing to talk about it. He completed a two-year mission for the Church to the Southern States as a young man and spent four years as a missionary in Illinois, Montana, Cyprus and Lebanon later in life. A memorial service will be held 11:00 AM, Saturday, July 15, 2017 in the Church of Latter-day Saints, 3401 Sweeten Creek Road, Arden, NC. The family will receive friends from 6:30 to 8:30 PM, Friday, July 14, 2017 at the church.

The family of Mr. Robert Dowdle "Bob" Collier created this Life Tributes page to make it easy to share your memories.

Send flowers to the Collier family.