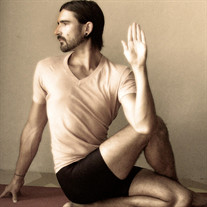 Ryan Conrad never met a stranger. His hugs were deep and true. You could see his smile from a block away and you always looked forward to crossing his path. He drank ginger ale and wore handmade shoes. You could count on him to be the healthiest, best-dressed and most magnetic individual in any room. He was a Physical Therapist and a yogi and a cook and a builder and a host and a teacher and a stylist and a dancer and a biker and a surfer. Ryan Conrad was at the show. Ryan Conrad was backstage. Between the spaces of those larger-than-life traits are the real-life stories that made up the life of our dear friend, Ryan Conrad. He was born July 25, 1978 in Lancaster Ohio to Dianna Johnson Conrad and Karl Conrad. In his teens he crossed the country traveling with bands and friends. His early college days were spent studying sustainable development at Appalachian State University. This ardor for form and design blossomed into the architecture of physiology, and eventually the architecture of life and loving. Ryan met so many of his dreams with deep passion, courage, and curiosity. He devoted more than half of his life to yoga—the disciplined side of it, devoting hours each day to his asana practice and sutra studies. He became a certified Iyengar Yoga instructor, and has since worked diligently to help his students find their best selves through a sustained yogic practice. In 2010, he became a doctor—not the stethoscope-holding kind, but a doctorate of physical therapy from UNC Chapel Hill to expand his knowledge of anatomy, physiology and deepen his abilities to provide assistance to those in need. He merged modern medicine with alignment-based yoga for his patients at Carepartners, who were working to get back on their feet from neurological and musculoskeletal trauma. He put these skills and his love of live music to work through the access program at Bonnaroo, helping those with disabilities to attend the annual music festival in Tennessee. Ryan was a wild rabbit that could not be tamed ‘til he met the love of his life, R. Brooke Priddy. During their early courtship, he was seen at the New French Bar crooning Patsy Cline’s “Crazy” acapella for Brooke and their best friend, Kelledy. A little later, 223 miles away from Brooke for his doctorate studies, every morning he woke and faced West and she woke and faced East and they spoke their daily devotional “I honor you and hold you in my heart.” Their love burned stronger and more committed with every year. They married in 2012 beneath the blue moon and stars amongst their closest friends and family. By the Autumn of 2015 came the birth of their son, Harper Reed. One of Ryan’s dearest friend’s David said, “I first met him as he was working in the garden behind Brooke’s studio. He was shirtless and long-haired at the time, so it was hard to tell if he was a hippie, a hipster, or something in between. When we began to speak, he emanated kindness and brilliance.” His finest hours were spent on his yoga mat; in the arms of his beloved Brooke; on a train in India; but mostly with his only son. Ryan died peacefully in his home surrounded with love. He is survived by his wife Brooke, his son Harper Reed, his parents Dianna Johnson Conrad and Karl Conrad, his grandmother Margaret Henry Johnson and his two dogs, the old hound Seymour and the blind, diabetic rescue dog, Keller. In lieu of flowers, the family requests memorial contributions: 1) Harper Reed Conrad's NC 529 College Fund. Checks may be made to Brooke Conrad with memo: Harper’s NC 529. Please mail to: The Conrad Family 85 State Street, Asheville, NC 28806 2) Pancreatic Cancer Action Network 3) B.K.S. Iyengar’s Bellur Krishnamachar & Seshamma Smaraka Niddhi Trust (BKSSNT) A Life Celebration for Ryan Conrad will be held at 4:00pm on Sunday, March 12th at the English Family Farm 98 Sunray Cove, Candler 28715 Lets share stories, make fire and revel in the beauty that was Ryan Patrick Dylan Conrad Write to [email protected] for more information

Ryan Conrad never met a stranger. His hugs were deep and true. You could see his smile from a block away and you always looked forward to crossing his path. He drank ginger ale and wore handmade shoes. You could count on him to be the healthiest,... View Obituary & Service Information

The family of Ryan Patrick Dylan Conrad created this Life Tributes page to make it easy to share your memories.

Ryan Conrad never met a stranger. His hugs were deep and true....

Send flowers to the Conrad family.