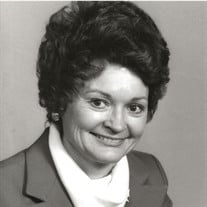 Stella Gaither Lewis, 96, native of Greensboro, NC, passed away peacefully April 5, 2021 at The Laurels of GreenTree Ridge nursing home in Asheville, NC. She was predeceased by her first husband, George Pete Bikas, father of her children, her... View Obituary & Service Information

The family of Stella Gaither Lewis created this Life Tributes page to make it easy to share your memories.

Send flowers to the Lewis family.