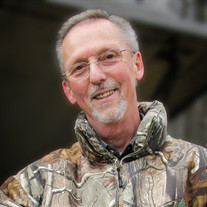 Stephen Randy Davis, 65 of Hendersonville, NC passed away after a short battle with cancer on Friday, September 27, 2019, surrounded by his family who will miss his kind spirit and loving interest in others. Randy was the son of the late John W. Davis and Barbara Swann Davis of Asheville. He is survived by brothers John W. Davis Jr. (Bud) of Fletcher (wife Beth), Mark V. Davis of Weaverville (wife Tonya) and his sister Brenda Swain of Asheville (husband Ken). He was a beloved uncle to nine nieces and nephews and a great-uncle to many. Inspired by his father, Randy was brought up in a music culture and at an early age started playing the bass fiddle. After graduating from A-B Tech with a degree in accounting, he was recruited by Bill Monroe to join the Bluegrass Boys. He spent over 5 years traveling with the band, which included several trips overseas to Japan and other interesting destinations. When he returned, he spent 9 years as a member of the Mark Pruitt Band playing bass and singing lead vocals at Bill Stanley’s BBQ and Bluegrass in Asheville, NC. Later, Randy spent several years performing with Norfolk Southern Lawmen Band for the Southern Railway. He was well known and respected all over the country by bluegrass fans and friends. During his career he worked for the Coca Cola Company and for over fifteen years for the Division 13, NCDOT in Asheville, where he was much loved by his work family. Randy was an avid sportsman and outdoorsman who loved to hike. One of his favorite hobbies from a young age was to deer hunt with family. He spent many days in the fall camping and hunting with his two buddies, brother Bud and dear friend Mike Hunter. In Randy’s neighborhood community, many counted on him to help maintain properties when they were unable. Randy was always happy to assist anyone who needed extra help. It was well known in the neighborhood that every evening after work Randy would go to his side yard and feed his deer. He had them all named and if he was running late, they would be waiting patiently for him. As a well-known musician in the bluegrass community, Randy leaves a legacy of excellent recordings, which include collaborations with Kenny Baker, Bill Monroe and many others. His talent and contribution to bluegrass music is a great loss. Special thanks to the staff at Mission Hospital St. Joseph Campus for the compassionate care they provided. A celebration of life service will be held at a later date. In lieu of flowers, appreciate some bluegrass music, adopt a pet without a home or take a hike in the woods and enjoy the outdoors. A Celebration of Life will be held on Saturday, October 26, 2019 between 2:00pm and 4:00pm at Highlands Cremation & Funeral Care, 2393 Hendersonville Road, Arden, NC 28704.

Stephen Randy Davis, 65 of Hendersonville, NC passed away after a short battle with cancer on Friday, September 27, 2019, surrounded by his family who will miss his kind spirit and loving interest in others. Randy was the son of the late John... View Obituary & Service Information

The family of Stephen Randy Davis created this Life Tributes page to make it easy to share your memories.

Stephen Randy Davis, 65 of Hendersonville, NC passed away after...