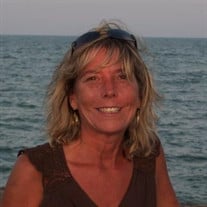 Tammy Lisa Edwards, 57 of Fletcher passed away at her residence on Sunday, August 22, 2021. She was welcomed home at The Pearly Gates by her mom, whom she cherished and deeply missed, and her other heavenly family. A native of Western North Carolina, Tammy was a lifetime member of Skyland First Baptist Church. She was the daughter of the late Paul Denver Edwards and Barbara Geneva (Hensley) Edwards Penland. She is survived by two fur babies, Jessie and Crisco; two daughters, Christina Sanders (Stephen Sanders) of Hendersonville and Mishey Butler (Sammie Surrett) of Fletcher; 5 grandchildren, Abie Sanders, Bella Sanders, Mason Surrett, Madison Surrett, and McKinley Surrett. All her grandchildren were proud to call her Nana. Although she was the baby of the family, she is also survived by one brother, Garry Edwards (Kim Edwards) of Indian Trail, NC and one sister, Brenda Christopher of Fletcher; one nephew, Robert Edwards (Alaina Edwards) and 3 nieces, Anndréa Hubbard (Kevin Hubbard), Kimberly Soofi (Ali Soofi), and Kaycee Edwards; and several great nieces and nephews. And her daughters would be remiss if they failed to mention that she is also preceded in death by several four-legged children: Barney, Mandy, Tito, Grady, Baby, Heifer, Pooter, and Gator. In addition to being a dog mom, she loved hummingbirds, Mountain Dew, particular fast food, and her TV shows/movies. She was dedicated to TC Roberson where she worked for several decades until she was no longer able in the last few years. She was passionate about her daughters’ and grandchildren’s softball and baseball activities. But, most importantly, she would always put others’ needs above her own, often sacrificing to do so. The immediate family will have a private gathering on Sunday, August 29th at Skyland First Baptist Church. In lieu of flowers, the Church will receive commemorations on behalf of the family. The family wishes to send a special thank you to Dr. Richard Burris for his care and compassion over the years. They also request that you leave your favorite memories of her on the Tribute Wall so they can reminisce and celebrate her life.

Tammy Lisa Edwards, 57 of Fletcher passed away at her residence on Sunday, August 22, 2021. She was welcomed home at The Pearly Gates by her mom, whom she cherished and deeply missed, and her other heavenly family. A native of Western North... View Obituary & Service Information

The family of Tammy Lisa Edwards created this Life Tributes page to make it easy to share your memories.

Tammy Lisa Edwards, 57 of Fletcher passed away at her residence...

Send flowers to the Edwards family.