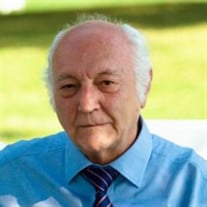 Dr. Zoltan Schelly passed away on April 1, 2021 in Asheville, NC at the age of 83 due to complications from strokes. Zoltan was a dedicated educator, father, husband, neighbor, mentor and friend. He lived with his wife, Dr. Joan Schelly (d.... View Obituary & Service Information

The family of Dr. Zoltan Schelly created this Life Tributes page to make it easy to share your memories.

Send flowers to the Schelly family.