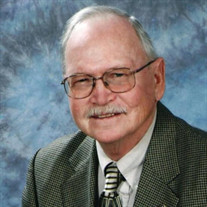 Clayton Leslie Davidson was born in Michigan Upper Peninsula’s Kingsford, Michigan on July 21, 1930, as the youngest son of James and Fern Davidson and the brother of Blair, Delores and Joyce Davidson. He was a person of good humor, devoted to his wife, his family, and the communities where he lived. He lived as a student, officer, engineer, manager, Methodist, and a person with artistic talents in acting, singing, and woodcarving. He started school early and skipped his last year of high school to enroll at seventeen at Michigan Technology Institute, traveling even further north in the Upper Peninsula. While at Tech he served in the ROTC, mainly because, as he notes, they gave him a small stipend and a warm winter coat –a nice step up from working on railroads, picking blueberries, and sleeping in barns to be near his work that he did prior to attending college. He graduated (cum laude) in 1951 with a bachelor’s degree in Chemical Engineering. Upon graduation, and after he was old enough to qualify, the US Army commissioned him as a 2nd Lieutenant and prepared him to serve. In 1952, he married his high school sweetheart Alice Mae Mitchell from the neighboring Iron Mountain, Michigan. Shortly after marriage he received orders to travel to Korea to participate in the war. He fought as part of the U.S. Army 2nd mortar battalion and was wounded in the fighting. After he returned home from Korea, he resumed his career as a chemical engineer with Dow Corning in Midland, Michigan. Over the course of his Dow Corning career, he and Alice lived in Midland, Michigan; Elizabethtown, Kentucky; Waterloo, Belgium; Campinas, Rio de Janerio, and Salvador, Brazil. Highlights were having the whole family living and learning in Belgium; and later living and traveling in South America. He earned a master’s degree from Indiana University in International Business. He worked and consulted in Japan, Germany, England, Canada, Mexico, and Argentina as well as Belgium and Brazil. He retired in 1989 but worked as a consultant until 1992. Throughout his life he was a member of many Methodist congregations and had great joy in fellowship and worship. Clayton and Alice were married a remarkable and joyous 68 years. He and Alice had four children one of whom died with a heart condition shortly after being born. His eldest son Richard has retired to the Western USA, his daughter Sonya lives and works as an entrepreneur in Beer Sheva, Israel, and his youngest son Jeff lives and works as a cofounder of a nanotech-cancer therapy company in Boalsburg, Pennsylvania. In 1997, Clay and Alice became outstanding Grandparents to Christopher and Cassidy. Next in their adventurous life, he and Alice moved to Florida before settling first in Flat Rock, North Carolina and then living a joyous fifteen years at Givens Estates in Asheville, North Carolina. Upon retirement, he and Alice continued their world travels, and while home he devoted his time to his artistic talents and being part of his community of friends, the Methodist church, and Kiwanis. Highlands Cremation and Funeral Care is serving the family and condolences may be sent to them through our website at https://www.highlandscremationandfuneralcare.com.

Clayton Leslie Davidson was born in Michigan Upper Peninsula&#8217;s Kingsford, Michigan on July 21, 1930, as the youngest son of James and Fern Davidson and the brother of Blair, Delores and Joyce Davidson. He was a person of good humor, devoted... View Obituary & Service Information

The family of Clayton Leslie Davidson created this Life Tributes page to make it easy to share your memories.

Send flowers to the Davidson family.