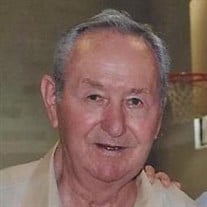 Fletcher Mr. Cletus Haywood Clark, 86, passed on Wednesday, November 22, 2017, with family present. Cletus was born in Anson County on November 26, 1930, a son of the late John Franklin and Annie Goodwin Clark. He is preceded in death by his son Cletus H. Clark Jr., two brother John & Tommy Clark. He is survived by his wife of 67 years, Annie Grooms Clark of the home; his children, Pamela Clark Robertson of Fletcher N.C., and Robert Steven Clark (Stuart Littleton) of Asheville, N.C.; four grandchildren and eight great grandchildren; brother William Marvin Clark of Lilesville, N.C. and Mildred Garner of Fayetteville, N.C. Cletus worked for Carolina Power and Light Company from 1949 until his retirement in 1985. He was both supervisor of maintenance and operations through the years. He was transferred to Asheville from Wilmington, N.C. in 1964. He, along with other families, were sent to start up the power plant at Lake Julian in Skyland. Cletus also helped to start a baseball program in south Asheville in 1965 and 1966. He had a love for baseball and wanted all children to have baseball fields to play on. He raised in excess of $40,000.00 to get fields lit and dugouts built. He coached a Babe Ruth team for five years. He spent five years at The Children’s Home in Winston Salem, N C. from age ten to age 15. He has been faithful to give back to the home and always attended Homecoming every year. Memorial services will be 1:00 PM Saturday Dec. 16 at Arden First Baptist Church with Rev. Timothy Brown officiating. The family will greet friends following the service. In lieu of flowers, gifts may be made to Crossnore School & Children’s Home 1001 Reynolda Road in Winston Salem, N.C. 27104 Highlands Cremation & Funeral Care, 2393 Hendersonville Rd., Arden, is assisting the family.

Fletcher Mr. Cletus Haywood Clark, 86, passed on Wednesday, November 22, 2017, with family present. Cletus was born in Anson County on November 26, 1930, a son of the late John Franklin and Annie Goodwin Clark. He is preceded in death by... View Obituary & Service Information

The family of Mr. Cletus Haywood Clark Sr. created this Life Tributes page to make it easy to share your memories.

Send flowers to the Clark family.