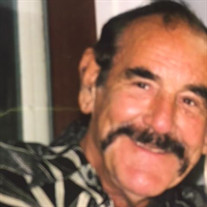 Cosby Jones Morgan, 82 of Fletcher, NC took flight to Spirit peacefully at home on November 13, 2017. Born September 9, 1935, Son of Joseph Fentress Morgan and Martha Susan Chappell of Elizabeth City, NC, brother of Ernest Morgan, Doris Ward and Carolyn Chevrier, Mr. Morgan enjoyed the Asheville area as his home since1976. His wife of 42 years, Cynthia, daughter Celeste Morgan Herrera, son-in-law Kenneth Paul Herrera of New York and their twin daughters Araceli Herrera and Bernadette Herrera were blessed by his love and kindness throughout their lives. Son Michael Morgan of California and daughter Melissa Morgan of Florida were also recipients of his devotion and love. Cosby graduated from Elizabeth City High School where he was voted President of the Key Club by his peers for excellence in academics, character and athletics. During school he worked at the local hosiery mill after his father died to supplement the family income. He served his neighborhood as a child delivering groceries and doing errands for those in need. Declining a football scholarship at Chowan College, he chose to work for the US Department of Justice as a file clerk. In 1955 he joined the Army, stationed at Sandia Army Base in New Mexico. He entered the military police force and was honored for firearms expertise and marksmanship, departing as a Sergeant in 1957. Returning to the FBI, Morgan attended American University at night earning a degree in accounting. As a Special Agent his first station was in Washington at Headquarters. He became certified in defensive tactics and Judo instruction, teaching at the White House gymnasium. Attorney General Robert Kennedy became his student and friend. Morgan later served in Butte, Montana, San Francisco and Asheville becoming Agent in Charge of Western North Carolina in 1976. Throughout his career he was selected for special operations, targeting the mafia and organized crime, kidnapping, racketeering, prostitution, bank robbery, voter fraud and various federal crimes. He was respected by his fellow agents, local sheriffs and policemen. He worked closely with the Chiefs of the Cherokee Tribe on the Reservation in Western North Carolina. Morgan served in the Wounded Knee confrontation in South Dakota, negotiating with the American Indian Movement. During the building of the Alaska pipeline he was active in exposing illegal criminal activities. Frank Sinatra befriended Morgan after he helped recover his kidnapped son. Patty Hearst was brought to court in San Francisco by Morgan for her trial. He worked closely with the Royal Canadian Mounted Police and Caribbean law enforcement supporting various international investigations. Throughout his station in Asheville, he held firearms instruction classes across North Carolina. Retiring from the FBI in 1986 after 30 years of proudly serving his country, Morgan began an investigative consulting firm, specializing in corporate fraud, embezzlement and counterfeiting. For 20 years he enjoyed assisting clients throughout the world. He retired in 2006 to enjoy his children, grandchildren, friends and family farm. He was a devoted father, often chaperoning his children’s class outings on field trips and supporting local fundraising efforts for education. Cosby filled the world with compassion, sensitivity and awareness. He lived his life as a man who was fair and truthful exemplifying a unique dedication to the rule of law, open heartedness, humility and humor. His priorities and pride were his family, friends and country. “How can I help you” were words he offered to everyone he met. His wealth soared beyond material gain and social class. He is a gentle giant among us, a quiet Master Teacher by example to those who by good fortune crossed the pathway of this gracious, wise man. A warrior for justice, he possessed swordlike discrimination, patience, perseverance, and courage. Cosby was born to provide, protect and serve. He fulfilled his destiny each day. Respected and loved by all, he often remarked he would “die a happy man” because he had a great life. Heaven above and the Earth below unite within him to support his venture forth to his next calling. There is no cause for grief, for life is eternal and separation is but temporary. He is with us all, as we each serve as a channel for his Light. A private celebration of Cosby’s exceptional lifetime will be held at a future date.

The family of Mr. Cosby Jones Morgan created this Life Tributes page to make it easy to share your memories.

Send flowers to the Morgan family.