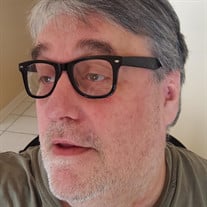 David Michael Scranton passed away unexpectedly on February 24, 2017, in Asheville, NC, embraced by his devoted and loving wife, Christine, and their children, Catherine and John. David was born on July 18, 1958, in Auburn, NY, son of Paul and Barbara (Gil) Scranton. He attended Northwood Institute at the Michigan campus and then at the Texas campus. After graduating from Northwood, he attended Alfred University in Alfred, NY, leaving there to create his computer networking business. He decided to join the corporate world for several years before returning to his networking business. In addition to his wife and children, David is survived by his parents and his siblings: Debra Lynn Godwin of Rochester, NY, Deidra Marie Cook of Harrisburg, NC, and Daniel Joseph (Rachel) Scranton of Sneads Ferry, NC. There are many aunts, uncles, cousins, nieces, nephews and friends who share the sadness of his passing and the celebration of his life. He was so loved and will be greatly missed. During part of his youth, David lived on a farm in Belmont, NY where there were vegetables, fruits and an apiary producing honey for family use and for sale. In his mid 20’s, he located in Silicon Valley. Included in his ensuing 25 year body of work culminating as a Managing Director at Memorex Telex NV, Mr. Scranton designed IP networks for Chevron, engineered Network Centers across Europe for Olivetti, and operated a 27 country Global Services Network for Memorex. In 1995 Mr. Scranton incorporated Unified Network Services (UNS) located in Research Triangle Park NC. Within three years UNS global clients included Bell Atlantic, Texas Utilities, Saudi Aramco and Jones Communications, Canada. In 1998 IBM awarded UNS recognition as it's Top Network Control Agent in the United States. In 1999, IBM awarded UNS as it's Top Agent prize in North America. UNS was purchased and merged into Cat Technologies shortly thereafter. In 2000, soon after settling with his family in the mountains of North Carolina, David began his work in synthetic ecosystems (ECOS) seeking to improve on applied technology in food production systems. Rather than applying technology to agriculture, his goals were to sublimate agriculture through applied technology. In 2008 ECOS was incorporated to develop Agrifacture. The practice of Agrifacture emerged, producing pure, safe, high quality crops, sans Mother Nature. This final project will move forward in his absence, and we look forward to the amazing results.

David Michael Scranton passed away unexpectedly on February 24, 2017, in Asheville, NC, embraced by his devoted and loving wife, Christine, and their children, Catherine and John. David was born on July 18, 1958, in Auburn, NY, son of Paul and... View Obituary & Service Information

The family of David Michael Scranton created this Life Tributes page to make it easy to share your memories.

Send flowers to the Scranton family.