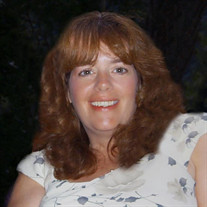 Jan Elizabeth (Frank) Hinson (55), of Fletcher, NC, passed peacefully on Friday, January 14, after a long illness and is with her savior in heaven. Jan was born in Suffern, NY, on July 30, 1966, and spent her early years in Nanuet, NY, with her parents and sisters, attending Nanuet High School. After high school, she worked for Rockland Psychiatric Center while earning her Associates degree in Business Administration from Rockland Community College. She was pursued endlessly by her future husband, Stuart, and they were married on September 23, 1989, at St. Anthony’s Catholic Church in Nanuet, NY. They moved to Asheville, NC, in 1994. Jan attended the University of North Carolina in Asheville and earned her Bachelor's degree in Industrial and Engineering Management. While working as a production planner for companies such as Eaton, Volvo, Borg-Warner, Tyco and Pentair, she raised two wonderful sons, Christopher (22) and Corey (20). She was the best mother to her boys and she made a happy life for her family. She cultivated a wealth of friendships over the years, and anyone who knew her loved her kind nature, beautiful smile, and contagious laugh. She will be missed by many and will never be forgotten. She was preceded in death by her father, Richard Frank (2014), her sister, Joanne Gyenes (2014) and a brother-in-law, Jimmy Craig (2020). She is survived by her husband, Stuart, her sons Christopher and Corey, her mother Eleanor Frank, and sisters Jean (Jimmy) Craig, Judy (Brian) Sawler, brother-in-law, John Gyenes, inlaws David and Barbara Hinson, brother-in-law, David Hinson, sister-in-law, Susan Rocker as well as many nieces and nephews. A Mass of Christian burial and memorial service will be held on Friday, January 28, at 11:00 am at St. Barnabas Catholic Church, 109 Crescent Hill Drive, Arden, NC 28704. The service will be streamed live on the St. Barnabas YouTube channel here: https://www.youtube.com/channel/UCHyTa2YWd0f1JtUrP8JQvvw In lieu of flowers, please consider making a donation to the Four Seasons Hospice in East Flat Rock or Mountain View Assisted Living in Hendersonville, NC, in her name

Jan Elizabeth (Frank) Hinson (55), of Fletcher, NC, passed peacefully on Friday, January 14, after a long illness and is with her savior in heaven. Jan was born in Suffern, NY, on July 30, 1966, and spent her early years in Nanuet, NY, with... View Obituary & Service Information

The family of Jan Elizabeth Hinson created this Life Tributes page to make it easy to share your memories.

Send flowers to the Hinson family.