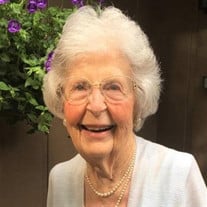 Janet Ritchie Smith, devoted daughter and sister, wife, mother, grandmother, aunt and friend, died peacefully at home, surrounded by her loving family, on February 5, 2018, at the age of 96. She was born on February 1, 1922 in Ottawa, Canada to Thomas Frederick Ritchie and Jane Dick Ritchie, the only daughter in a family of three children. She was preceded in death by her husband of 64 years, Edward Holman Smith, and her two brothers, Frederick Hurdman Ritchie and George Dick Ritchie, both of Aylmer East, Quebec. She graduated from MacDonald College and went on to receive a Master’s degree in nutrition from Cornell University in 1947. It was there that she met Ed, a newly-minted PhD in entomology. In addition to raising four children in Geneva and Ithaca, New York, their life together included scientific travel to the Amazon in the early 1960s; China following its opening to the west in 1972; Nairobi, Kenya, for six months on sabbatical; Thailand and Afghanistan. Following Ed’s retirement from Cornell in 1993, the couple moved to Asheville. Here they made new friends, connected with old ones, and continued their work on the biography of entomological pioneer Charles Valentine Riley. (The book is scheduled for publication in 2019 by the University of Alabama Press.) When not doing research on Riley, Jan enjoyed bird watching, reading the daily New York Times, sharing poetry with Ed, playing a friendly game of bridge, baking for family and friends, gardening, painting Ukrainian Easter eggs, and orchestrating the annual gathering of her children, grandchildren, nieces and nephews at Isle of Palms, S. C., a tradition that she continued for 15 years. Janet is survived by her four children: Janet Smith Moore of Asheville and her husband Parker Moore; Rebecca Cothran Smith and her husband Keith Mendelson of McLean, VA; Joel Allen Smith and his wife Katherine Megrue Smith of Bernardsville, NJ; and Jane McNaughton Smith of Arlington, VA. Her legacy is in the capable hands of her ten grandchildren, Hannah Mendelson (Jordon Anthony-Brown), Daniel Mendelson and Lydia Mendelson; Amelia Moore; Sam Jensen and Henry Jensen; Laureana “Elle” Smith, Edward Smith, Allen Smith and Sarah Smith; numerous nieces and nephews, their children and grandchildren. A memorial service in celebration of her life will be held in Asheville for family and friends later this summer. In lieu of flowers, the family requests that donations in her memory be made to The North Carolina Arboretum (www.ncarboretum.org), a place where she and Ed spent time enjoying the seasons. “Though my soul may set in darkness, it will rise in perfect light. I have loved the stars too fondly to be fearful of the night.” Sarah Williams

Janet Ritchie Smith, devoted daughter and sister, wife, mother, grandmother, aunt and friend, died peacefully at home, surrounded by her loving family, on February 5, 2018, at the age of 96. She was born on February 1, 1922 in Ottawa, Canada... View Obituary & Service Information

The family of Janet Smith created this Life Tributes page to make it easy to share your memories.

Send flowers to the Smith family.