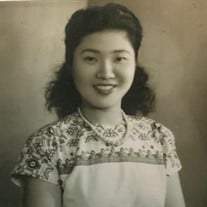 Kim Y. Thompson, 94, of River Mills, NC passed away at Mission Hospital in Asheville, NC on Monday July 13, 2020. She was born Kimiko Yamamoto on September 20, 1925 in Fukuoka, Japan and was the granddaughter of one of the last Samurai Warriors. In 1952 as a 1st grade teacher attending a school sporting event, when a student was injured and a serviceman offered to take the boy to a military hospital nearby, Kim was directed by the school’s Principal to go with the serviceman and student to the hospital. This meeting between Kim and the serviceman later turned into a 43 year marriage between Kim and Jackie Roy Thompson of Waco, TX. During their marriage, Jackie’s military service took Kim many places and they lived in Japan, Okinawa, Philippines, Hawaii, Texas, California and Michigan while raising Cindy, Lucille and Ed, their 3 children. Although on the surface Kim’s life may have appeared simple, it was a remarkable journey. On August 9, 1945 Kim was living in Kokura, Japan, the primary target for the 2nd atomic bomb. Due to cloud cover that day, the B-29 bomber overflew Kokura and changed course to Nagasaki when it was unable to confirm the target point at Kokura. In 1953 in order to marry Jackie, she had to convert from being a Buddhist to a Catholic, changing her religious beliefs. She was then required to get her father’s written permission to marry, and when permission from her father was not possible, her older brother forged her father’s signature so Kim could marry Jackie. She also passed the test to become a U.S. citizen, and taught herself how to speak fluent English. She was the only bi-lingual member of her family. Family separations were also not uncommon, including the uncertainly of 1964-1965 while Jackie was serving in the Vietnam War and Kim was in Waco with 3 children. Since Jackie’s passing away in 1997, Kim has lived with her daughter, Lucille Gartman. Kim’s 4 siblings have all since passed away, and she is survived by a daughter, son, 2 daughters-in-law, a son-in-law, 4 grandchildren and 5 great grandchildren. All are very grateful to have known and loved their remarkable mother, grandmother and great grandmother from Japan.

Kim Y. Thompson, 94, of River Mills, NC passed away at Mission Hospital in Asheville, NC on Monday July 13, 2020. She was born Kimiko Yamamoto on September 20, 1925 in Fukuoka, Japan and was the granddaughter of one of the last Samurai Warriors.... View Obituary & Service Information

The family of Kim Y. Thompson created this Life Tributes page to make it easy to share your memories.

Send flowers to the Thompson family.