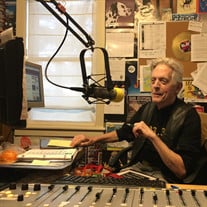 Phil Bowditch, born Philip Brush Bowditch, died January 1, 2021 at Mission Hospital in Asheville, North Carolina, of natural causes. He is survived by his siblings (Kate Bowditch, Elise Bowditch, and Sabra Bodratti,), his wife of many years, Janice Burns of New York City, and his nieces and nephews (Kati Bowditch, Lance Hoffman, Jessica Garcia, and Adam Bodratti) and their families. Memorial information is at the end of this obituary. Phil was born on the east coast on June 28, 1944, but grew up in Boise, Idaho. While others might be driving hot rods and motorcycles, Phil successfully restored a Model-T Ford over his teen-age years and was a young member of the Horseless Carriage Club of Idaho. He joined the Navy at 18, became a codebreaker there, and attended Shimer College when his stint was over. A skilled artist and woodworker, Phil’s real passion was music. He taught himself banjo and guitar early, and joined the Old Tyme Fiddler’s Club, their youngest member. He was part of the 60’s art and music scene in New York City, painting alone and playing in a variety of bands. He loved teaching. He taught music throughout his adult life. He taught guitar for many years through the Lighthouse for the Blind, and the Turtle Bay School of Music, both in New York City. As a former student said – “Everyone, and I mean EVERYONE, took guitar lessons from him. He was not just a guitar teacher, he was a legend.” After 2001, Phil and his partner, Marjo Nordhorn, left New York and moved to Asheville, NC, where he continued to teach guitar and play. He worked as a census taker in 2010, which took him all over Buncombe County, meeting people and gathering stories. His passion for politics led him to election work, where he became a local precinct captain. One of his great joys was the political talk show he started on community radio, Asheville 103FM (“The Horse’s Mouth with Bowditch”). Phil was later joined by two friends, and the show became a long-running radio staple in the area. In Asheville, Phil enjoyed his quieter, more peaceful life with nature on his property. Phil always bonded with animals. He was especially fond of his dogs, cats, and possums. Phil took great care of feral cats, whether in New York or in Asheville, and rescued many pets over the years. Phil also had great interest in, and in-depth knowledge of, antiques, the Civil War, World War II, and early aviation. He could entertain anyone with detailed stories and anecdotes about history, and with his political rants, which he shared on his radio show. Making friends wherever he went, he was a renaissance/broke the mold kind of man. Phil will be sorely missed by his family and friends. In lieu of flowers, donations to: Asheville 103.3 ( https://www.ashevillefm.org/donate/ ), Brother Wolf Animal Rescue (https://www.bwar.org), or the Appalachian Wildlife Refuge (https://www.appalachianwild.org) would be in keeping with Phil’s spirit and passions. A Memorial/Remembrance gathering will be held February 21, 2021 in Zoom. Remembering Phil Bowditch Time: Feb 21, 2021, 3:30 PM Eastern Time; 12:30 PM Pacific Time (US and Canada) Join Zoom Meeting https://us02web.zoom.us/j/88125224145?pwd=cDRpa0hhQlpjSWZydlFNTUs0T0JMZz09 Meeting ID: 881 2522 4145 Passcode: 918020 One tap mobile 12532158782,,88125224145#,,,,*918020# US (Tacoma) 16699006833,,88125224145#,,,,*918020# US (San Jose) Dial by your location 1 253 215 8782 US (Tacoma) 1 669 900 6833 US (San Jose) 1 346 248 7799 US (Houston) 1 301 715 8592 US (Washington DC) 1 312 626 6799 US (Chicago) 1 929 205 6099 US (New York) Meeting ID: 881 2522 4145 Passcode: 918020 Find your local number: https://us02web.zoom.us/u/kc3p5cMPaR

The family of Philip Brush Bowditch created this Life Tributes page to make it easy to share your memories.

Send flowers to the Bowditch family.